Congratulations! Last weekend, our Eagles Football Academy U16-18 won 7-2, in the league 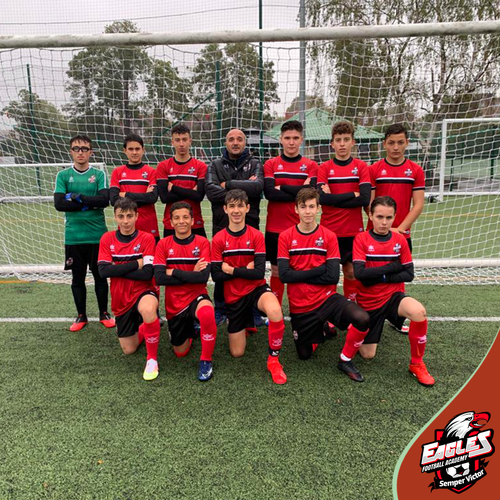 We saw very encouraging football during last weekend, when our U15-16 and U16-18 teams were involved in action in the London Premier Youth League competitions.

The Eagles Football Academy U16-18 team showed a lot of quality and strenght, winning 7-2! The goals were scored by Robert Păpălău (3), Eduard Gușatu (2), Cyril Arron (1) and Răzvan Calotă (1). Coaches Gabriel Dumitru and Paul Grigoraș were very pleased by the team-work and communication between the players: "They really showed what they're made of! We have a quality squad and the intense physical effort was something we really liked watching", said Gabriel Dumitru, after analyzing the overall performance.

The Eagles U15-16 team was not that lucky: our team lost 4-1, after a few individual mistakes in the centre of the park. Our players were lead 0-3 at half-time after a slow start, but the second half showed great improvement: "It wasn't a bad game on our behalf, I like the attitude we had in the second half and the way we shaped our team on the pitch. Results will come and go, but certain players are putting a show, so that's very encouraging", said Gabriel Dumitru, who already knows the adjustments he needs to make.

Alongside physio and assistant coach Paul Grigoraș, Gabriel Dumitru will work a special set of drills in the coming week, to prepare our players for the next games in the London Premier Youth League! Stay tuned and fly high! GO EAGLES!